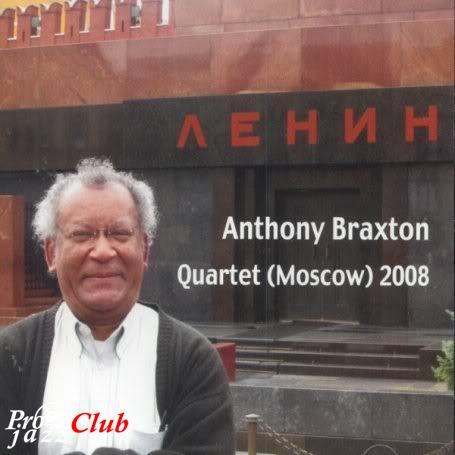 Треклист:
Anthony Braxton Quartet (Moscow) 2008
Жанр: Avant-Garde
Страна-производитель диска: UK
Год издания диска: 2008
Издатель (лейбл): LEO RECORDS
Номер по каталогу: CD LR 518
Страна: USA
Аудио кодек: Monkey's Audio (*.ape)
Тип рипа: image+.cue
Битрейт аудио: lossless
Продолжительность: 01:13:03
Источник (релизер): CD
Наличие сканов в содержимом раздачи: да
TrackListing::
1. Composition 367b (70:04)
2. Encore (3:01)
Recorded live at the DOM, Moscow on June 29, 2008
Credits:
Продюссер - Leo Feigin
Запись, сведение, мастеринг - Алексей Лапин
Лог создания рипа
Содержание индексной карты (.CUE)
Personnel
Anthony Braxton - sopranino, soprano, and alto saxophones, contrabass clarinet
Taylor Ho Bynum - cornet, flugelhorn, piccolo and bass trumpets, valve trombone
Mary Halvorson - electric guitar
Katherine Young - bassoon
All Aboiut Jazz
These are not easy times for casual followers of reed player Anthony Braxton. New releases of his music, many of them multiple disc sets, continue to arrive at an alarming (and ruinous) rate. In addition, Braxton continues to add new classifications of his music, creating a bewildering complexity for those trying to hear the new releases in some context. Braxton's Ghost Trance Music (which evolved into Accelerated Ghost Trance Music) seems now to have run its course, although there are still unreleased examples of it which will doubtless aid understanding of the totality. From the Ghost Trance Music, Braxton has now moved on to the Diamond Curtain Wall (DCW) Music, the Falling River Music and the Echo Echo Mirror House Music. Confused? Join the club.
So, let's make some sense of this latest release. It dates from June 2008, when the Diamond Curtain Wall Quartet toured Europe visiting France, Russia and Italy. This quartet adds Katherine Young on bassoon to the Diamond Wall Trio (Braxton plus cornetist Taylor Ho Bynum and guitarist Mary Halvorson) that was recorded on Trio (Victoriaville) 2007 (Victo, 2007). The only other previous recordings of Diamond Wall Music were also on Leo—4 Compositions (Ulrichsberg) 2005 and Trio(Glasgow) 2005 (both Leo, 2005). This CD records the quartet's Moscow concert. Lest there be any doubt, the cover photographs capture a beaming Braxton posing outside Lenin's tomb and St. Basil's cathedral in Red Square.
The defining characteristic of the Diamond Curtain Wall Music is Braxton's use of reactive laptop electronics (created using Super-Collider software). Given the recent prevalence of laptops and electronics in performances of improvised music, this development by Braxton is no great surprise, and opens up exciting possibilities. Reports of the live experience speak of the computer electronics creating a shimmering veil of sound on stage that is compatible with the name Diamond Curtain Wall. To date, none of the recordings of the DCW support these reports, the electronics occasionally being audible rather than being an ever present element of the sound. Nor do the recordings give evidence of the electronics being "reactive" in the sense of them responding to the music played by the quartet; they certainly sound less reactive than the (human controlled) electronics in Evan Parker's Electro-Acoustic Ensemble, to pick an obvious comparison. Instead, it is the players of this quartet who react to each other and to the stimuli provided by the electronics; maybe the essence of these new Braxton compositions is to provide suitably stimulating environments that get the best out of the players.
Anyway, based on the end results, the DCW Music must be judged a success. Too often, the appearance of laptops onstage is a prelude to extended drones which allow little space for creativity on acoustic instruments. Here, the opening section, during which the electronics are audible, indicate that may be what lies in store; there is an electronic drone similar to guitar feedback. Instead, we get something more akin to a concerto, where the musicians are given space to interact and express themselves. After about half a minute, Braxton makes a dramatic entrance on soprano, soon joined by Bynum and Halvorson. All the musicians seize the opportunities offered by the electronics and exploit them fully. Bursting with ideas and energy, Braxton imaginatively employs his full range of tones, from the twittering sopranino to the profundities of the contrabass clarinet, the latter being particularly noteworthy, and leads the line to stunning effect. Taylor Ho Bynum and Mary Halvorson, both former students of Braxton, are adept at interpreting his music with imagination.
Bynum's responses repeatedly complement Braxton's playing, particularly when his cornet weaves around the depth of the contrabass clarinet; at points Braxton and Bynum lock horns, spontaneously generating ensemble passages that sound pre-planned but are doubtless the product of their familiarity from playing together—let's not forget they have played as a duo before, and it shows. On his own, Bynum is just as able to spin out phrases that are focussed and engaging. As ever, Halvorson's guitar is a vital component of the overall sound, propelling the music forward; whether it sounds acoustic or electric, whether generating comping chords or washes of feedback, it always has the capacity to steer proceedings or to take the listener completely by surprise. Maybe predictably, the three members of the DCW trio dominate, with newcomer Young adding colouration to the sound rather than grabbing the limelight as the others do. "Composition 367B," the main piece here, lasts over seventy minutes, and is mesmerising throughout. This recording heralds the start of another new era for Braxton, one that it will be a pleasure to watch unfold. --John Eyles, AAJ
Диск сграблен с "мастера" Plextor-Premium-ом и выставлен, по просьбе ув. Darkman
Any questions -> support@pro-jazz.com. По всем вопросам пишите -> support@pro-jazz.com
—
177
M0p94ok
Нет комментариев. Ваш будет первым!
Войдите или зарегистрируйтесь чтобы добавлять комментарии