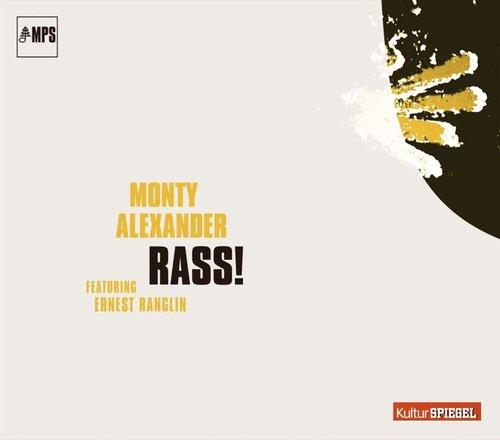 AllMusic Review by Thom Jurek
In the early '70s, jazz piano great Monty Alexander moved back to his native Jamaica, where he had been schooled by some of the greatest musicians in the country's history including Rolando Alphonso, Don Drummond, and Ernest Ranglin. Alexander was signed to Germany's MPS label at the time and decided to cut a record in Kingston. Rass! is the first full-length offering to feature him on the Fender Rhodes in a monstrously great program of soul, Caribbean folk styles, and calypso. His bandmates include Ranglin, second guitarist Clarence "Trini" Wears, bassist Jackie Jackson, drummer Sparrow Marlin, conguero Noel Seale, and percussionist Denzil "Pops" Lang. Alexander's trademark elegant athleticism is tempered somewhat when one contrasts his acoustic playing with the Rhodes, but he's exceptionally fleet. His reasoning was simple: three percussionists, electric guitars, and bass. This music is all about groove. There are two covers of Al Green tunes; there's the lilting "Let's Stay Together," which gently twinkles and shimmers along a slippery line, and a bumping reggae take on "Love and Happiness," where both the pianist and Ranglin shine. The guitarist takes the first break and his facility reveals itself as nothing short of astonishing. Alexander's use of reverb pedals and backbeat vamping before his own killer solo is delicious. "Sly Mongoose," with its interplay between the pianist and percussionists, has a nursery rhyme-esque folk flavor, underscored and transported to the land of jazz by the guitarists, as Jackson's bassline rolls and tumbles, pushing it all along. "Knowing That We Were Meant for Each Other," usually associated with Roberta Flack, is as breezy as it is funky; the pianist makes use of the Rhodes' high register before finding a Latin groove in the bass register as a lift-off point for Ranglin's break. Alexander does a stellar job of updating the traditional "Limbo." Here it is a cooker that combines progressive jazz, funky Latin grooves, and calypso. For many artists this would be a set opener, but taking the set out with such an intensely celebratory jam is the perfect touch. Rass! may be the most uncommon of all of the pianist's recordings, but it is one of his most iconic. In the relaxed proceedings, one can actually hear that all of these players had known each other for decades by the time of this session. Their instinctive, egoless conversation, aided by simple, canny charts and expressive, unguarded joy, makes Rass! one of Alexander's finest and most enduring albums to boot.
Состав: