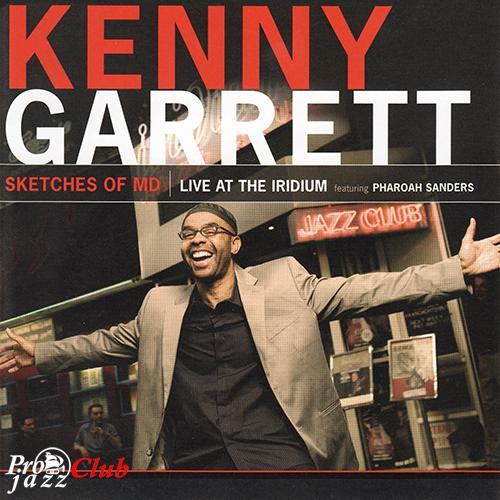 Треклист:
Kenny Garrett - Sketches Of MD: Live At The Iridium Жанр: Post-Bop, Fusion
Носитель: CD
Год издания: 2008
Издатель (лейбл): Mack Avenue Records
Номер по каталогу: MAC 1042
Аудиокодек: FLAC (*.flac)
Тип рипа: tracks+.cue
Битрейт аудио: lossless
Продолжительность: 56:41
Источник (релизер): ruskaval
Наличие сканов в содержимом раздачи: да
Треклист:
01. The Ring (14:35)
02. Intro To Africa (9:21)
03. Sketches Of MD (10:03)
04. Wayne's Thang (10:58)
05. Happy People (11:44)
Personnel:
Kenny Garrett - alto saxophone, bass clarinet, organ, synthesizer
Benito Gonzales - piano, Fender Rhodes, synthesizer
Nat Reeves - bass
Jamire Williams - drums
Pharaoh Sanders - tenor saxophone, vocals
Об альбоме (сборнике)
Though it was recorded live at New York's jazz emporium, Iridium, Detroit born saxophonist Kenny Garrett makes a return home of sorts with Sketches of MD, his debut on the Motor City's own Mack Avenue Records. His quartet here, with bassist Nat Reeves, pianist/organist Benito Gonzalez, and drummer Jamire Williams, may not possess the star power of some of his studio albums, but this band is more than up for the gig. In addition, saxophonist Pharoah Sanders reprises his role from Beyond the Wall from 2006 as Garrett's foil, creating sparks aplenty.
Garrett's been a lot of places since he left Detroit: he was a member of one of Miles Davis' later electric groups, and in his own generous collection of albums his explorations have run the gamut, from hard-driving post-bop explorations in African Exchange Student to the post-Coltrane modalism and Eastern overtones on Beyond the Wall to the varied jazz-funk workout on Happy People. Here, Garrett offers a sincere crowd-pleasing set of his own tunes that covers all of these terrains. All five of these pieces are long. The set commences with "The Ring," an extended, hypnotic modal workout with Gonzalez playing his best McCoy Tyner, and Garrett's alto and Sanders' tenor beautifully articulated. On "Intro to Africa," Gene Ammons' soul meets Duke Ellington's blues in a sultry mix of honking and blowing. The vamp is repetitive as in a repeated coda, but serves to build the tune up into something both folksy and profound – especially as Sanders and Garrett begin to chant along with the piano. The title track begins as a skeletal sketch played out in rhythmic quotes from Reeves and in breaks by Williams; Garrett's and Sanders' exchanges are minimal, ratcheting up the tension in the groove where the pulse feels more pronounced as Gonzalez colors in the frame with painterly synth washes. This is among the most beautiful and quietly rousing things here. There is an excellent version of Garrett's now trademark "Wayne's Thang" with grooved-out funk led initially by a bass drum and a hi-hat vamp by Williams and Gonzalez's Rhodes. Garrett's alto comes strutting in the door with a spare but killer strut in call and response with Williams until the keyboardist begins to solo and Sanders enters. The set closes with "Happy People," where Williams' kit shuffles and shifts from tom-toms and cymbal bells to hi-hat and snares as Garrett and Sanders dig into everything from tough and contemporary jazz to R&B to quoting Weather Report and the electric groove of mid-'70s Herbie Hancock.Gonzalez is a big player here, not so much as a soloist – though he is that – but more the cornerstone of the evolving sounds and textures this group is putting forth. What is most pleasing about Sketches of MD is that Garrett is as concerned with offering his audience a solid and utterly engaging show as he is with having himself thought of as a banner-carrying sophisticated jazzman. And that's where he stands above so many of his contemporaries: Garrett finds beauty and worth in a rainbow of jazz's expressions in the 21st century. This set is an excellent debut showcase for Garrett on Mack Avenue.
Лог создания рипа
Содержание индексной карты (.CUE)