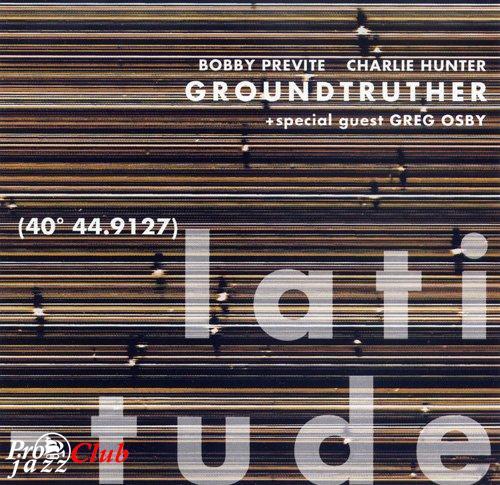 Thirsty Ear Records
Latitude is the exciting first entry into a very special trilogy of recordings for Thirsty Ear's Blue Series: an ongoing collaboration between Charlie Hunter and Bobby Previte, two unique and formidable musicians with reputations that precede them. Each album is made special with the addition of a different guest, so that each recording documents a fresh and unique trio. Charlie Hunter is well-known as the world-class master of his custom-made 8-string guitar, on which he fills the role not only of guitarist but bassist as well. Bobby Previte is a drummer, composer and leader who has gained great critical recognition for all facets of his musicianship. Greg Osby is a Blue Note recording artist who, in addition to his own success as a leader, has lent his lyrical blowing skills on the alto sax to the music of such luminaries as Jack Dejohnette, Andrew Hill, Steve Coleman, and Jim Hall. On Latitude Osby's lyricism is morphed into countless shapes and colors, underpinned by Previte's use of electronic drums to trigger samples live and employ his percussion as a tonal instrument that intertwines with Hunter's endless rhythmic flow and funky melodicism. The result is a sound that speaks to jazz fans on both sides of the avantgarde/ mainstream divide, as well as those who enjoy electronica or the jam-band scene. Latitude is a great omen of what is to come in the rest of the trilogy. ~ Thirsty Ear Records
AMG Review
Groundtruther is not a band, actually, but a project created by guitarist/composer Charlie Hunter and drummer, composer, and electronics maestro Bobby Previte. There will be three albums in the Groundtruther catalog when it's all done, of which Latitude is the first -- Longitude and Altitude are the other titles in the series. In addition to the duo, each album will play host to a different guest instrumentalist, making each album a trio offering. On Latitude, it is saxophonist Greg Osby. Illustrating the conceptual nature of the outing are the track titles, "North Pole," "Arctic Circle," and "40th Parallel," all the way to "Tropic of Calms," and "South Pole" on the other end with many stops between. This is a freewheeling recording, improvisation based on rhythm and riff are the framework for each selection while Osby is the bridge not only between musicians, but the interpolator whatever language is being spoken. Strange sonics and beats come popping out of Previte's ether as Hunter struts and snakes around them with this jazz-o'-time-and-space warp style of bending not only individual notes but entire chords and riff figures into something exotic and new. Where he appears, Osby in his wonderfully articulated blues-meets-free jazz manner of soloing, offers historical weight to these proceedings, but also a melodic construction that roots them to jazz's heritage in the moment. Whether it's the freely improvised "North Pole," the shifty futuristic bluesy funk of "Horse Latitudes North," the steamy, slim-line funk of "Equator," or the shimmering, futuristic ambience in "Antarctic Circle," he brings the focus to the tradition itself, allowing his bandmates to extrapolate and bead it on geographical meditation. Osby is absent on "Tropic of Cancer," and the result is an excursion into fragmented, angular junglism, and Previte's breaks and Hunter's guitar spar and turn on a dime in some sort of humid futurist twilight zone. Latitude is an engaging if sometimes confounding listen and offers plenty of interest as to what the next two volumes will hold. ~ Thom Jurek, AMG
EAC Report