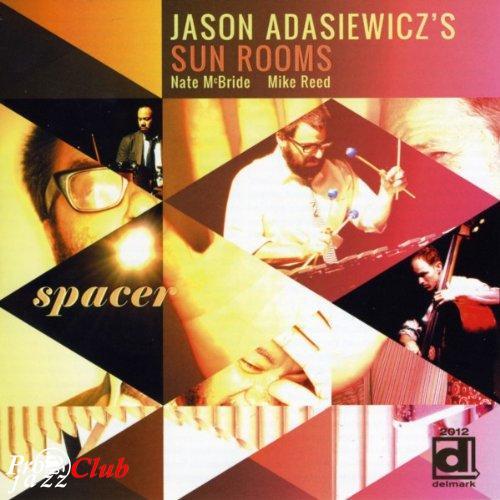 Треклист:
Jason Adasiewicz's Sun Rooms / Spacer
Жанр: Modern Creative
Носитель: CD
Страна-производитель диска: USA
Год издания: 2011
Издатель (лейбл): Delmark
Номер по каталогу: DE 2012
Страна: USA
Аудиокодек: FLAC (*.flac)
Тип рипа: tracks+.cue
Битрейт аудио: lossless
Продолжительность: 42:42
Источник (релизер): anch
Наличие сканов в содержимом раздачи: нет
Треклист:
01 Solo One {Jason Adasiewicz} 1:42
02 Hi Touch {Jason Adasiewicz} 6:02
03 Run Fly {Jason Adasiewicz} 4:55
04 Pillow {Jason Adasiewicz} 3:51
05 The Volunteer {Nate McBride} 4:49
06 Bees {Jason Adasiewicz} 5:34
07 Bobbie {Eric Boeren} 4:24
08 Diesel {Jason Adasiewicz} 4:53
09 Waiting in the Attic {Jason Adasiewicz} 3:56
10 Solo Two {Jason Adasiewicz} 2:37
Лог создания рипа
Содержание индексной карты (.CUE)
Доп. информация:
скрытый текст
Sun Rooms is Jason Adasiewicz's three year old trio featuring Jason (vibraphone), Mike Reed (drums) and Nate McBride (bass). Their debut record Sun Rooms was named by the New York Times (Ben Ratliff) as one of the Top 10 Pop and Jazz Records of 2010. Spacer was written in the winter of 2011 and slowly shaped through a month long residency at a north side Chicago bar, The Whistler. Engineered by Griffin Rodriguez, Spacer documents 8 new tunes by Adasiewicz, one from McBride, and one from Dutch cornetist Eric Boeren.
Об альбоме (сборнике)
The vibraphone has been an integral part of jazz history at least since Lionel Hampton’s bands of the 1940s, really coming to fruition with the work of bop and chamber-jazz vibist Milt Jackson over the subsequent decade. The wide range of tonal possibilities on the instrument, as well as its percussive versatility, made it a natural fit for the jazz vanguard with musicians like Bobby Hutcherson, Walt Dickerson, Karl Berger, Khan Jamal, and Gunter Hampel among the instrument’s most important practitioners. Players like Hutcherson and Jackson often used the vibes along with piano accompaniment and were rarely the sole chordal accent in an ensemble. That allowed the vibes to prove their capabilities as a front-line percussion instrument, but tended to eclipse adaptability, which is ostensibly why the instrument has a special place in improvised music.
Chicago-based vibraphonist and composer Jason Adasiewicz is one of the busiest young players on the Windy City scene, working with his own quintet Rolldown as well as with Rob Mazurek’s Exploding Star Orchestra, Josh Berman, Ken Vandermark, Arrive, and numerous other ensembles. Sun Rooms is a trio with drummer Mike Reed and bassist Nate McBride, and Spacer is their second record to date for venerable Chicago jazz and blues label Delmark. Adasiewicz started his musical career on drums (he was formerly in Pinetop Seven); he switched to vibes in the late 90s and is a musician who explores the instrument’s mettle without a chordal foil, building gossamer masses and rhythmic variations with spellbinding detail. Sun Rooms is about as open a vehicle for his work as could be imagined, stripped down to unadorned presentation with the dry, swinging accompaniment of bass and drums over which Adasiewicz lets fly. The instrumentation is similar to some of Dickerson’s trios of the late 70s and early 80s, though with a predilection to shorter tunes and vignettes. As a composer and interpreter, Adasiewicz favors the knotty ambiguity and harmonic complexity of pianist-composers Andrew Hill, Sun Ra, and Hasaan Ibn Ali, though his own tunes are certainly “his.” On Spacer, all but two pieces are by the vibraphonist; McBride contributes “The Volunteer” and Dutch trumpeter Eric Boeren penned “Bobbie.”
Two solo pieces bookend the disc, with “Solo One” sounding almost like a chopped-up Oval composition, though Adasiewicz’ striking technique, developing overtones against terse clips, is entirely acoustic and real-time. “Hi Touch” puts a tumbling, round melody in collusion with a rather tough vamp that breaks out into stuttering asides. The leader’s solo unfolds into a staccato carpet as he balances sharp tones with rounder assemblages. McBride and Reed offer a throaty and insistent counterpoint with the bassist’s calloused grit reminiscent of Henry Grimes, while Reed maintains a no-frills sense of time, curiously both relaxed and aggressive. “Run Fly” is a slinky near-rumba, the drummer’s rim shots and loose attack alternating between smooth post-bop and bare-minimum funk. The theme is glorious and glassy, Adasiewicz building a precise plenum of sound that fills every nook and cranny while maintaining a cool, bright distance.
“Pillow” marks time with a dusky sensibility, vibes and bass outlining a stark and suspended image before Adasiewicz telescopes dotted lines into a woody, resonant tonal area. His affinity for Andrew Hill is especially clear on this piece, which recalls the contrasting shrouds and open areas of that composer’s work. It’s tough music, but such confounding aesthetics can be extremely rewarding. Programmatically, McBride’s “The Volunteer” offers the levity of a bright, playful bounce, gently swinging music that nevertheless presents involved and active interplay. Against the pull of a pizzicato yoke, Adasiewicz toys with flatness and shimmer, layering and spattering but maintaining a connection to thematic comfort. “Diesel” swings madly around and underneath the vibraphonist’s ropey statements, Reed chomping at the bit before getting in a cracking, martial solo. “Waiting in the Attic” expounds beautifully on a familiar phrase fragment that Adasciewicz has made use of several times — namely, a plaintive and warm riff on the theme from Brazil. There is energy and intensity to the piece as brushes and vibes create an agitated stew of fiddling repetition, though the underlying state is almost dreamlike. While there may be a number of opportunities to hear Adasiewicz in top form, Sun Rooms is a particularly fascinating trio that gives the vibraphonist ample room to stretch. It’s no wonder that he and his mates on Spacer are among Chicago’s first-call jazzmen.
Состав
Jason Adasiewicz - vibraphone;
Nate McBride - bass;
Mike Reed - drums
По всем вопросам пишите личное сообщение пользователю M0p94ok.
—
167
M0p94ok
Нет комментариев. Ваш будет первым!
Войдите или зарегистрируйтесь чтобы добавлять комментарии