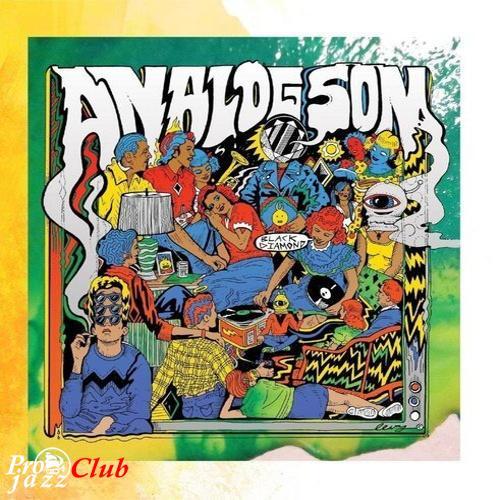 Треклист:
Analog Son / Black Diamond
Жанр: Jazz-Funk, Soul, Rhythm & Blues
Носитель: CD
Год издания: 2017
Аудиокодек: FLAC (*.flac)
Тип рипа: tracks+.cue
Битрейт аудио: lossless
Продолжительность: 35:16
Источник (релизер): artmuss
Наличие сканов в содержимом раздачи: нет
Треклист:
1. Blue Nile (03:44)
2. Eyes for You (feat. Corey Frye) (03:55)
3. Big Easy (feat. Devon Parker) (04:50)
4. A Trip Around the Sun Pt. II (03:27)
5. Under the Oaks (04:33)
6. Ain't Lyin' (feat. Jonathan "Skippy" Huvard) (03:45)
7. Black Diamond (feat. Jason Hann) (03:35)
8. Sunshine (feat. Ivan Neville) (03:23)
9. Sky High (04:00)
Лог создания рипа
Содержание индексной карты (.CUE)
Лог проверки качества
Об исполнителе (группе)
Analog Son has come up with many wild creations and a futuristic Funk sound, while honoring the 1970s Funk foundation. Hailing from Denver, CO, the Analog Son duo has had great success recruiting top-notch musicians for their collaborations. It's no secret; the two just know how to produce some excellent music!
Black Diamond, features a who's who of performers—Ivan Neville, The Shady Horns, aka Ryan Zoidis and Eric "Benny" Bloom of Lettuce, as well as Joe Tatton of the New Mastersounds, Terrence Houston of George Porter Jr. & Runnin' Pardners, and Jason Hann of The String Cheese Incident on percussion.
Black Diamond finds Analog Son in fine form. I think it's their best record yet. You can hear how they're evolving, and grooving hard.
I love how Black Diamond features more New Orleans style Funk than their first two albums. It sounds to me like they've been spending some time in the Big Easy, as well as collaborating with New Orleans musicians as they roll through Colorado.
The stand out New Orleans style tunes are the following...
Of course, the one featuring Ivan Neville, shines. "Sunshine" is a funky love song with a dope organ groove, and tons of soul.
"Under The Oaks" is instrumental Funk at its finest! It's got that New Orleans bounce, and joyful horns propelling it along. Drum & bass are tight in the pocket, as Jordan Linit dances his guitar (with plenty of wah-wah) over this killer groove.
"Ain't Lyin'" is a bluesy, funky, soulful Rock song that reminds me of late night bands in New Orleans bars.
Certainly, their ode to the Crescent City, "Big Easy," with Devon Parker's super soulful vocals captures that New Orleans Funk vibe. It's a musical story about the joys of the city, and feels nice and easy with her vocals complimenting the players' jamming. Pay attention for the laid-back, funky breakdown...then she comes back in to take the tune to its New Orleans party music finish.
Another great guest vocal appearance comes from Corey Frye, the lead singer of The Main Squeeze. "Eyes For You" is the perfect intersection of old-school Funk and modern Funk because the band gets tight in the pocket playing the Funk as if it were 1974, as Frye sings his love for his lady and shows he has the vocal chops of a classic Soul Man (while being one of the best new voices in modern Funk & Soul music). Like the rest of the record, this tune proves Analog Son can play classic Funk with a contemporary approach, impeccable production, and unique composition that is among the best on today's Funk music scene.
The instrumental Funk tunes on Black Diamond are breathtaking. The album starts with heavy wah-wah and hot horns on "Blue Nile" and the band finds the perfect groove from the get go. "A Trip Around The Sun" is another impressive instrumental Funk song, with sensational keyboard work to compliment Jordan Linit's rapid wah-wah. "Sky High" closes out Black Diamond with a dope organ jam and happy horns, grooving on top of a badass backbeat and deft drumming.
Analog Son always puts a glide in your stride and a dip in your hip. Black Diamond shows the band evolving into a modern Funk powerhouse that keeps getting better.
Because they record their albums with vintage studio equipment, there's an organic quality that seeps onto this record. You definitely hear and feel the rawness of their analog recording techniques. Analog Son's visceral music blows the mind as it takes old-school Funk sky high and on into the 2000s.
https://www.allaboutjazz.com/black-diamond-analog-son-self-produced-review-by-joe-gatto.php
http://www.analogson.com
Раздаю до первых 5-ти скачавших, на раздачи не возвращаюсь...