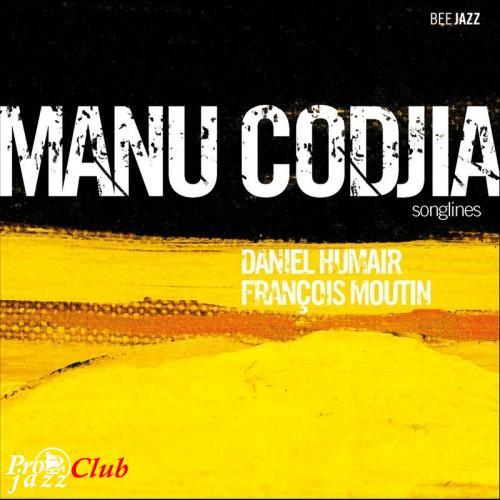 Треклист:
Manu Codjia / Songlines
Жанр: Avant-Garde Jazz, Modern Jazz
Страна-производитель диска: France
Год издания: 2007
Издатель (лейбл): Bee Jazz
Номер по каталогу: BEE 018
Аудиокодек: FLAC (*.flac)
Тип рипа: tracks
Битрейт аудио: lossless
Продолжительность: 51:30
Источник (релизер): cinci
Наличие сканов в содержимом раздачи: да
Треклист:
01 Lubyes
02 Jamin'
03 Ritournelle Part I
04 Ritournelle Part II
05 Motion Spivari
06 N'Yack Stuff Bass Intro
07 N'Yack Stuff Suite
08 Al Blade;
09 Nage Mute Prologue
10 Nage Mute Part I
11 Nage Mute Drums Interlude
12 Nage Mute Part II
13 Nage Mute Epilogue
14 Roc Ferek
15 Nicolas' Clock
16 Free Al
Manu Codjia - electric and acoustic guitars
Francois Moutin - bass
Daniel Humair - drums
Лог проверки качества
Об альбоме (сборнике)
Electric guitarists in jazz sort themselves into two camps. Do you follow the magisterial Charlie Christian, and favor clean lines that a horn player might play, using electricity the way Billie Holiday used a microphone to make subtle nuances more easily heard? Or do you follow the arguably less gifted (but equally influential) Johnny Smith, embracing fuzz and sustain and all the wonderful things that pedals can do? After rock and roll had its way with the instrument, this second path would certainly be the more often traveled.
Guitarist Emmanuel Codjia will have none of these distinctions. On the one hand, he exploits the sonic capabilities of the electric instrument for all they're worth, completely at home with the aesthetic contributions of rock and roll, but also with the gentle sort of sound wash one associates with Bill Frisell. On the other hand, Codjia constructs his solos drawing on a very melodic conception. It is interesting but not impossible to imagine many of the improvisations included on Songlines, his first album as leader, transcribed to the saxophone or the trumpet.
Many listeners will have their favorite Codjia moment, given the guitarist's considerable productivity as a sideman in recent years. Mine is his solo on "Reflection," on Christophe Wallemme's Namaste (Bee Jazz, 2006).
For his first date as leader, Codjia could easily have gathered many of his musical traveling companions in a kind of French jazz all-star extravaganza. Instead, he has wisely opted for an intimate and far more demanding trio format with heavyweights Daniel Humair on drums and François Moutin on bass. The downside of this strategy is that you do not hear on this record the implicit empathy among musicians that is the fruit of a long partnership. To our benefit, though, Codjia is kept on his toes by his more experienced sidemen.
Part of the pleasure of listening to Songlines is the insertion of a loud electric guitar into a relatively intimate acoustic jazz trio you might have thought more suited to a piano leader. Whether Codjia's playing is steely and crackling ("N'Yack Stuff") or dreamy ("Al Blade"), you hear the bass strings slapping and the slightest brushing of the cymbals; this is a tribute to engineer Gérard de Haro. The multi-part "Nage Mute" appears to feature some subtle overdubs, but mostly the record sounds live.
Most of the compositions are quite good, which is critical in a small group setting. At several points—"Jamin'," the closing moments of Codjia's solo on "N'Yack Stuff," the lovely "Al Blade," "Nicolas' Clock"—you have the feeling you've heard these melodies before. "Roc Ferek 's mix of ersatz heavy metal and bop improvisation is not always as successful, but well worth the effort.
Any questions -> support@pro-jazz.com. По всем вопросам пишите -> support@pro-jazz.com
—
154
M0p94ok
Нет комментариев. Ваш будет первым!
Войдите или зарегистрируйтесь чтобы добавлять комментарии