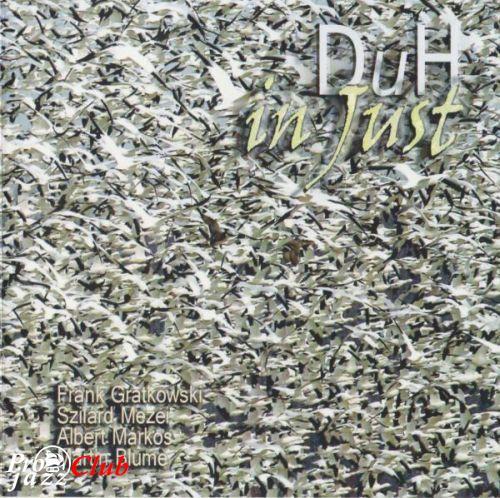 Треклист:
1. In Just 10:55
2. Spring 6:56
3. Balloonman 6:29
4. Mud-Luscious 4:01
5. Hop-Scotch 6:34
6. Jump-Rope 5:50
7. Far And Wee 2:26
8. Goat-Footed 10:19
Лог создания рипа
Содержание индексной карты (.CUE)
Лог проверки качества
Доп. информация:
Album Info & AAJ Review
Music by Frank Gratkowski (GEMA), Szilard Mezei (SOKOJ), Albert Markos (ARTISJUS) & Martin Blume (GEMA)
Recorded May 3, 2010 at LOFT, Cologne, by Christian Heck
Mixed & mastered by Szilard Mezei
Special thanks to Hans Martin Mueller from the LOFT
Photographs: William de Merchant
Cover design: Marcel Boucher
Executive producer: Michel Passaretti
Free improvisation guarantees the sound of surprise in a way that few other musical strains do. While the primacy of the moment and the players' responses in it and to it are the prime motivations for the music, this will always be the case. This makes the idea of trying to define just what governs the success of the resulting music a slippery notion but, however it might be pinned down, In Just falls very much on the positive side.
That sounds like faint praise, but it would be difficult to try and define just what it is about such intensely inscrutable music that holds the attention, even though it does so with interest. This ensures that the small sounds at the opening of "spring" are compelling in themselves, less the next best thing to silence and more as the result of an understanding of that elusive quality. Szilard Mezel's viola and Albert Markos' cello seem to have the effect of coming together, only to draw apart quickly, as if motivated by mutual distrust.
Despite not immediately follow such title discussions, "goat-footed" could be the other side of the same coin. The strings are again capricious enough to suggest the similarly string-oriented version of the Spontaneous Music Ensemble, before drummer Martin Blumes sounds like a man trying to impose fractious order. As the music progresses Frank Gratkowski, on clarinet, lays claim to territory on the periphery of the music, but such is the primacy of that moment again that the resulting tension is quickly dissipated.
"hop-scotch" suggests something more playful than the reality of the music, at least at first. Gratkowski teases out a meandering line to which Mezel adheres before taking wing, but received notions have only tangential relevance. This is hardly surprising given this music's fearsome individuality.
Состав
Frank Gratkowski: alto saxophone, clarinet, bass clarinet
Szilard Mezei: viola
Albert Markos: cello
Martin Blume: drums, percussions
Any questions -> support@pro-jazz.com. По всем вопросам пишите -> support@pro-jazz.com
—
185
M0p94ok
Нет комментариев. Ваш будет первым!
Войдите или зарегистрируйтесь чтобы добавлять комментарии