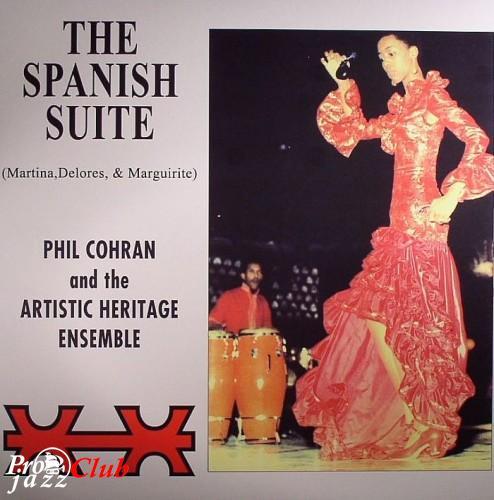 Треклист:
Phil Cohran & The Artistic Heritage Ensemble / The Spanish Suite
Жанр: Avant-Garde Jazz, AACM
Год издания: 2009
Издатель (лейбл): Katalyst Entertainment
Номер по каталогу: 639492003482
Страна: USA
Аудиокодек: FLAC (*.flac)
Тип рипа: tracks+.cue
Битрейт аудио: lossless
Продолжительность: 00:39:31
Источник (релизер): davin900
Наличие сканов в содержимом раздачи: нет
Треклист:
1. The Spanish Suite
youtube
Лог создания рипа
Содержание индексной карты (.CUE)
Об исполнителе (группе)
There is too much to say about Kelan Phil Cohran, from his work with Sun Ra, his involvement in the foundation of the AACM, his work at the Afro-Arts Theatre, to his memorial for Malcom X.
We believe Kelan Phil Cohran is a shaman. We are not the only ones and you will feel this too if you spend some time with the man and his music. tizonarecords.com
Об альбоме (сборнике)
This album is just one piece of music, recorded live at the Affro Arts Theatre. It doesn't take much to associate with this the unique performance of Charles Mingus called “Tijuana Moods” recorded in 1962, where bassist/composer Mingus after being fed with jazz and music gave a more than convincing performance with a new idea based upon a flamenco theme based performed or inspired from a sensual table dance. The piece of Philip Cohran however is much more ambitious. It has the seriousness of a classical composition, mixed with a huge brass band combo's vision, at the same time this is returned to themes of spontaneous, and of course jazz driven improvisation, not through showing skills in solos, because there's a certain modesty or semi-amateurism in the playing or singing, which never the less shows a very strong communal energy like a global unity by keeping the musical energy and mood intact, the band returns to certain accents and themes with extra power when needed.
The full recording of this only one huge and near 40 minute track, a complete full LP, has been restored in its completeness into just one track made possible on a CD format.
It seems that this piece was also written (-in a romanticised version of the facts, like a vision that more fits to what is left over now and could be restored again from our times and point of view from certain specific starting points looking for further complition of their desires-) “to magnify that Moorish Spain made on the European Renaissance” (did it?). It was also, according to the liner notes, an attempt to play outside of the 12-tone system to return to natural tone relationships. In that way it refers a bit more to flamenco (originating in the form it is associated from a much later date by the way) as well as to a few African and near-eastern elements which are greatly adapted in spontaneous improvisation-alike parts, like for instance an electrified thumb piano part or a solo on eastern clarinet. Elsewhere you can also hear the inclusion of near-classical almost baroque melody which appears here and there. Most musicians have their own voice and solos or near-solos part, like the congas, the magnificently resuming-a-basic-theme bass, and of course trumpet and the already mentioned eastern clarinet. A few wordless female vocal parts were added as well. The band rarely plays with full power, the composition often unfolds itself very smoothly and logically. The themes are developed in such a way the mood unfolds itself with it, so that the playing remains vivid and it is very mood provoking. Rhythmically I also noticed a few Latin rhythms. A great entertaining piece of music by a 14 piece band, and a convincing live performance. The full track is given airplay in my radio show. Recommended. psychemusic.org
Great lost work from the legendary Phil Cohran and his Artistic Heritage Ensemble – a composition that was recorded during the group's late 60s years on the Chicago scene – but which has never been released until now! The album stands beautifully alongside the group's self-titled classic and their tribute to Malcolm X – and like those amazing records, this one has a feel that's all its own – an exploration of Moorish elements in Spanish culture – which comes off as a Latin-inflected sound with African roots! The lineup here is similar to other Cohran classics – Donald Myrick on baritone sax, Charles James Williams on alto, Eugene Easton on tenor, Charles Handy on trumpet, Willie Woods on trombone, Aaron Dodd on tuba, Pete Cosey on guitar, Henry Gibson on congas, and Louis Satterfield on bass – a mix of musicians that includes members with Sun Ra and Earth Wind & Fire listed in their resumes! Cohran's vision in the suite is wonderful – and the music has all the depth and righteous energy of his self-titled record, but a bit more Latin fire too – a beautiful blend that really makes us appreciate his genius even more than before, and which finally gives us another record of his to love after all these years. (Packaged in a cool record-style sleeve.) © 1996-2013, Dusty Groove, Inc.
Состав
Philip Cohran on cornet,
Donald Myrick on baritone sax,
Charles James Williams on alto,
Eugene Easton on tenor,
Charles Handy on trumpet,
Willie Woods on trombone,
Aaron Dodd on tuba,
Pete Cosey on guitar,
Henry Gibson on congas,
Louis Satterfield on bass
composed and arranged by Philip Cohran.
Any questions -> support@pro-jazz.com. По всем вопросам пишите -> support@pro-jazz.com
—
141
M0p94ok
Нет комментариев. Ваш будет первым!
Войдите или зарегистрируйтесь чтобы добавлять комментарии