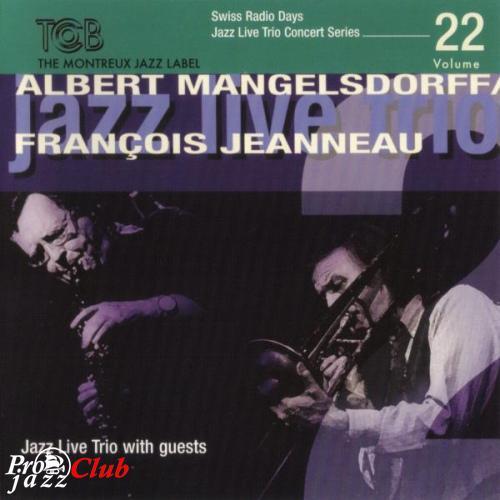 Треклист:
Albert Mangelsdorff / François Jeanneau - Jazz Live Trio
Swiss Radio Days
Jazz Live Trio Concert Series, Volume 22
Жанр: Modern Creative
Страна-производитель диска: Austria / EEC
Год издания диска: 2010
Издатель (лейбл): TCB Music SA (The Montreux Jazz Label)
Номер по каталогу: 02222
Страна исполнителей: Germany / France
Аудио кодек: APE (*.ape)
Тип рипа: image+.cue
Битрейт аудио: lossless
Продолжительность: 01:07:42
Источник (релизер): barin99
Наличие сканов в содержимом раздачи: да
Треклист:
1. Part 1
2. Part 2
3. Le Lynx
4. Suite Eolienne
Personnel:
Albert Mangelsdorff — trombone (1, 2)
François Jeanneau — sax (tenor), sax (sorano) (3, 4)
Klaus Koenig — piano
Peter Frei — bass
Peter Schmidlin — drums (1, 2)
Pierre Favre — drums (3, 4)
Лог создания рипа (EAC Log)
Содержание индексной карты (.CUE)
challenge.nl
"Albert – I always called him Albertus Magnus – was our guest on Jazz Live twice. The first time, in 1967, we dutifully played a series of Standards in the mainstream style. However, in 1972 he was already so deeply involved in music that had been released from its fixed structures that he suggested we play two half-hour sets without any specific written material. We immediately agreed because all of us in the trio were already infected by the zeitgeist during those years, searching for ways to achieve a “freer”, less predetermined approach to music beyond the traditional song forms.
There was no playing of other people’s pieces from sheet music, which occasionally made our radio concerts quite stressful. So the evening was both relaxed and exciting. This is actually the ideal precondition for an artistic act. We included a recording of that concert’s first set on this CD.
François Janneau was the first Frenchman who we invited for a Jazz Live concert. He sent us a series of themes, which we carefully prepared. When I asked him about the tempos of the pieces during the rehearsal, he laughed and said that there were no set tempos, that it was free music. But the themes definitely had harmony structures, as well as a form. We were excited by this challenge of filtering unknown results from very traditional pieces and accepting the composed patterns solely as a general reference point and not as binding structures.
Experiments for a freer approach to the composed material were in the air at that time and had also cast their spell on us. Peter Frei and I were somewhere in the middle between free and fixed playing. Our drummer Pierre Favre had spent many years in total dedication to the free jazz movement, so he obviously was not opposed to Janneau’s concept."
Any questions -> support@pro-jazz.com. По всем вопросам пишите -> support@pro-jazz.com
—
210
M0p94ok
Нет комментариев. Ваш будет первым!
Войдите или зарегистрируйтесь чтобы добавлять комментарии