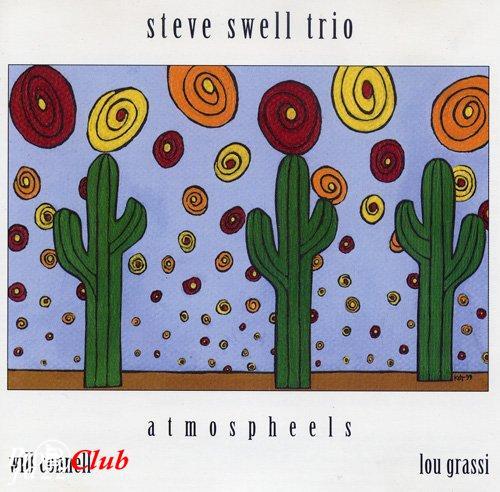 CMIP Release Notes
When Steve arrived for this date, it was apparent that he had been attending to more than just music in the 15 months since his last led recording (Moons of Jupiter, CIMP 149), because he was trim and fit and looked about 8 years younger. It would be hard to imagine music any more vigorous than Moons of Jupiter, but when he opened with “Labor’s Daze,” it was immediately apparent that Steve had trimmed none of his old vigor. Steve is a rather intense guy and it almost seemed as if the session could not have started differently: so strong and pent up was the need to get these ideas out and get the session going. Steve sweats into a catharsis.
Steve is a member of Lou Grassi’s PoBand (Cadence Jazz Records 1062, CIMP 156) and it was in that context that, in the spring of 1997 (when Will Connell substituted for Perry Robinson) these 3 first played together. After this meeting there were a couple of gigs with the trio and then Steve deliberated for a while, telling me only that he was working on something, but he was not yet ready to present the idea. Then, sometime in the early winter, after more deliberation, tapes of rehearsals began to come. By the spring of 1998 things seemed to be on track and this session was scheduled.
Besides hearing what new music and developments Steve had been up to, I looked forward to getting a better fix on Will Connell (1938, L.A., CA). Will began his professional career in the mid ‘60s as a member of the Horace Tapscott groups. And, although he has had a number of affiliations, including substantial tenures with Tapscott, Chico Hamilton, William Parker and, most recently, David Murray, his work has often been as a copyist/notator. As a result he confessed to some nervousness as, by his account, this is his first featured outing in 18 years, since the quartet recording of Commitment (Flying Panda Records) (co-founded with Jason Hwang). Will is quite a conversationalist with unusual worldwide experiences and a broad and deep knowledge of things both musical and political. It’s obvious he has much to converse about musically as well. His work also exhibits, for me, a root in Benny Golson.
Will’s partner in conversation in this concert is often Lou Grassi. Lou’s strength, duologs and dialogs, puts him rightfully in a tradition that runs from Krupa to Roach to Jones to Bennink and his role is a large reason why this group moves past its trio-ness. His punchy interplay has been documented on a number of other CIMPs but is particularly evident on the duo with saxman Bob Magnuson (CIMP 169), in trio with Burton Greene (CIMP 182), and in leading his PoBand where he manages to spar with his quartet/quintet and drive and orchestrate the direction.
We recorded a lot of music over 2 days, the overwhelming majority of it at a level to sustain listening, all of it intense and dense. This is the best of it: Swell music indeed. ~ Robert D. Rusch - 8/4/98
AMG Review
Propelled by the singularly powerful drumming of Lou Grassi, this unusual trio of trombone, saxophone, and drums/percussion packs a powerful punch that rarely lets up. This is Swell's strongest statement as a leader, as the trombonist brashly swaggers across the court, his big-toned bell belting out rough-edged sounds of joyous tunefulness. Swell reaches back to 1960s Roswell Rudd, as he lets his emotions hang on the slide. The missing bass and piano are rarely a thought as Swell's arrangements and Grassi's tough, rambunctious battle cries fill the gaps. Will Connell is the second horn, and he fills the slot without missing a step. His alto sticks mostly to the middle of the horn, but he matches the trombonist for raw energy. This is Connell's first feature on a recording in eighteen years, so he's had plenty of time to prepare. The CD is a good place to get to know trombonist Steve Swell, who continues to grow as a performer. ~ Steve Loewy, AMG
EAC Report
По всем вопросам пишите личное сообщение пользователю M0p94ok.
—
183
M0p94ok
Нет комментариев. Ваш будет первым!
Войдите или зарегистрируйтесь чтобы добавлять комментарии